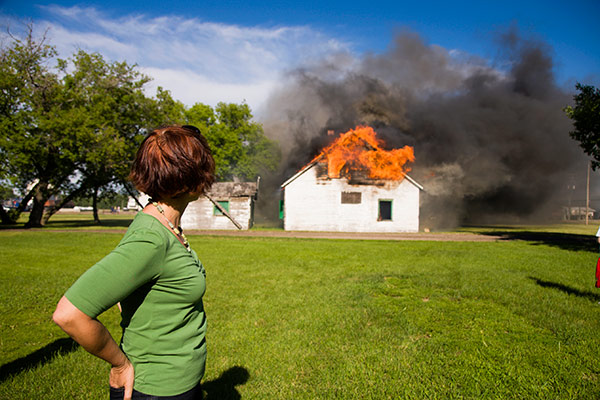 A small fire broke out in your kitchen and the fire department came racing to put it out. Your Goshen home is still standing and there doesn’t seem to be much damage on the outside. Good news! The fire didn’t destroy everything. Now for the bad news. There is still a lot of damage on the inside. The fire department has come and gone and now you are stuck hopelessly staring at the charred remains of your kitchen. What do you do now?

Dealing with a fire can be traumatizing and knowing what to do once the fire has been put out is very important. There are roughly 370,000 house fires a year in the United States. How many of those homeowners do you think were prepared to deal with the aftermath of the fire? You may think that cleaning up the mess on your own is daunting but doable, but don’t fool yourself. Cleaning up the damage dealt by a fire and the water that was used to put it out can be a huge undertaking and if not done correctly, can lead to even more damage. Performing Do-it-yourself fire and smoke damage cleanup can also put your health at risk.

Most people don’t understand how much damage smoke can cause. So what exactly is smoke and why is it so dangerous?

Smoke is the fuel that didn’t burn. It is made up of particles of carbon, tar, and other materials including tiny particles called PM10. PM10 means “Particulate Matter less than 10 microns in diameter”. Most smoke particles are less than 1 micron in diameter. Smoke from house fires can contain a big range of toxic gasses. Smoke leaves behind a black powdery residue, film, and an odor. The film is a greasy yellowish brown color.  It is hard to get off and the longer it is on, the harder it gets. The soot, film, and odor need to be cleaned out of the house. Any materials that don’t need to be pulled completely out the need to be properly cleaned so they are free of toxins.

Unless you have gained permission from your fire marshal you should refrain from entering your home. There are several reasons why the fire marshal might not let you enter your home, including integral damage to the buildings structure. You don’t want to be standing in your kitchen when the roof or walls start to collapse.

Cleaning up your home

What you need to do is call a professionally trained company. The professionals will come in and decide what can be saved and what cannot. It is understandable that you will be shaken up and exhausted after dealing with the fire incident, but don’t put off call the professionals. Time is not on your side when it comes to fire and smoke damage cleanup. Ash is acidic and will continue to cause damage until it is cleaned up and soot will cause permanent staining if left for even a short period of time. If you end up needing Fire and Smoke damage repair in Goshen, call Hudson Valley Contracting & DKI.